You’re reading a book, a bystander looking into the action but at the same time so deeply involved in the characters and their stories. You’ve never met these people, maybe because they are merely fictional manifestations of the author’s creative self, but you swear you know exactly what they sound like. Their voice is as real as the story is relatable.

Voice does not have to be spoken to be heard. The deaf present their voice through sign language, artists theirs through art, and writers of course in the written word. But there is another category of voice that we are newly tapping into—and that is the voice of an avatar.

An avatar is really a bridge between reality and imagination, an animation that captures a sort of semi-fiction. With Voki, you pick the visual attributes you’d like your avatar to display, whether it be the armor of a knight or the uniform of a baseball hero—and much more in between—and then you give it a voice. It’s a pretty cool thing if you think about it—the act of injecting speech into something that represents your imagination.

I work for Voki, so I might be a tad bit partial, but even I was elated with the avatar I created recently. I took a Shakespearean sonnet, pasted it into the TTS field, and chose “Hugh” as the English accent in which I wanted the poem to be narrated. Then, voila! My Voki was speaking in perfect iambic pentameter as if Shakespeare was uttering the words himself.

Besides the TTS option, there are also other ways to give your Voki a voice—you can record your own or upload an audio file. For instance, you may choose to have your Voki hot dog avatar speak in your own unique tongue, or have the Voki Donald Trump pronounce one of his sayings by uploading a sound byte. The Voki tools also allow nonverbal users to type in text and have it audibly expressed.

I don’t know about you, but I studied Latin in high school and college, so my foreign language skills don’t extend much further than a splattering of non-English words. Voki is pretty handy for monolingual people like me and for those more diligently trying to master new languages. Simply type in your text and choose from over 30 languages to translate it into. Violeta, Bernard and the rest of the gang will get you on your way to becoming multilingual in no time. Perfecto!

Now that the Voki for Education app is out, accessing voice is now easier than ever. Students can create Vokis on their iPhones or iPads and follow the same steps to get their Vokis’ mouths moving. This app is especially useful for integrating technology in the classroom, quick assessments, and calling on students to get creative and CREATE. And you know, sharing your voice in this world is the name of the game, and that’s exactly what the app allows you to do—share on social media, email, and embed onto other platforms.

Now, enough about me.  I’d really like to know—what’s your Voki’s story?

Catherine Alvino is the Digital Marketing 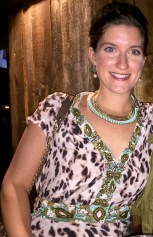 Coordinator at Oddcast. She holds a BA in English Literature and a MBA with a concentration in Marketing. She loves to write and is proud to work for a company that adds value to learning.